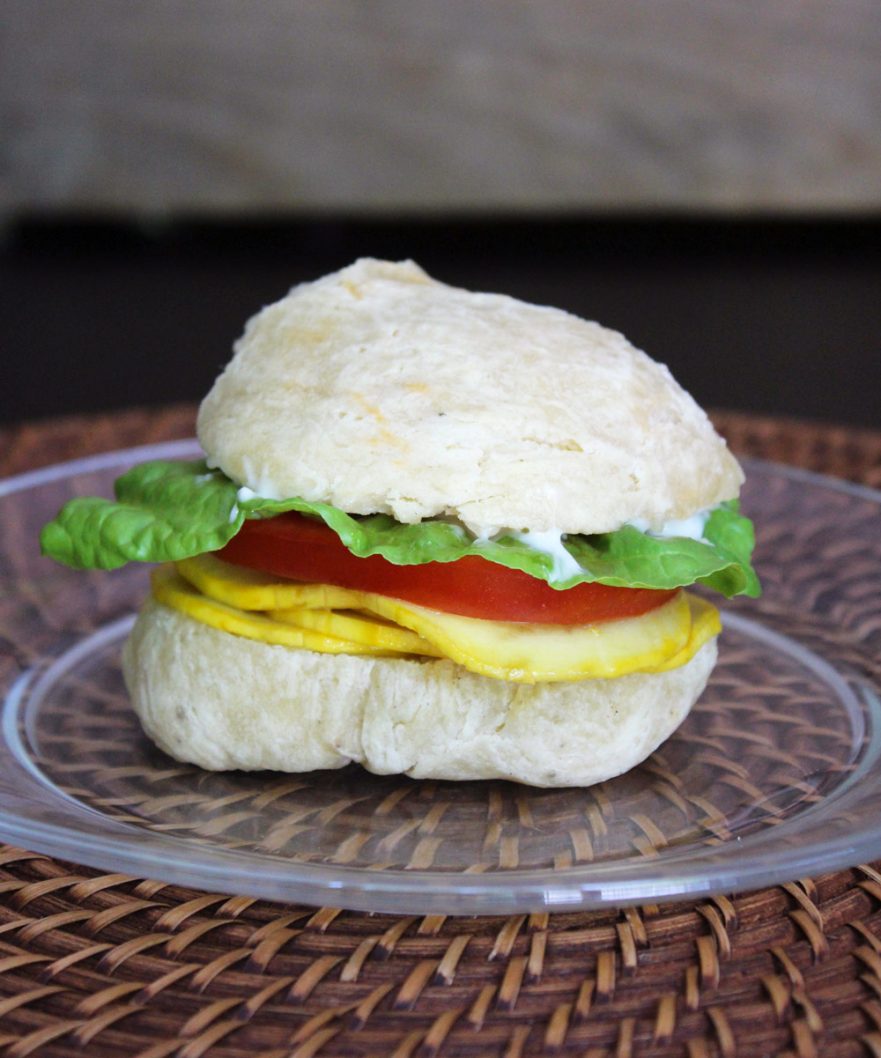 I am very excited about this sandwich, I can hardly contain my enthusiasm! I devoured this very sandwich just a minute ago and can’t get over how satisfying it was! I had been craving a good sandwich with substance, flavor, and simplicity.

I grew up on ham, turkey, and roast beef sandwiches with mayo, lettuce, tomato and potato bread, it was easy and tasty but always messed with stomach; and yet I still miss it dearly. After all these years of recreating my childhood favorites to be more tummy-friendly, I’ve realized that only 2 things matter; flavor and texture. Every time I try to fill a craving I think, what has a similar texture, and how can I get that flavor?

As I was making zucchini chips I realized the salt and vinegar zucchini slices, after they soaked and dehydrated for about 1 hour, released their juices and got really tender and flimsy; like deli meat.

I thought, “If it’s marinaded like a honey ham and put in between buns with your favorite toppings and condiments, you probably wouldn’t notice too much of a difference.” And boy was I right!! I was anxious to try tim so I didn’t let the zucchini dry as much as it should have, and so some of the juices soaked into the bread expanding the sweet delicious marinade throughout the sandwich.

The marinade makes the zucchini taste like smoked sweet hickory ham. It is made with a little bit of olive oil, coconut nectar, soy sauce, liquid smoke, sea salt, basil, and spices.

A small amount of liquid smoke is used to create that signature smoky flavor.

Soy sauce is used to imitate meat’s umami. Umami is the savory taste we crave. It’s why we love meat, beans, cheese, soy/soy sauce, and tomatoes or ketchup/salsa/red sauce/etc.  They all have that savory flavor we love so dearly! So to amp up the umami, you splash a little bit of soy sauce into the marinade.

Instead of honey, I opted for another liquid sweetener, coconut nectar. It’s much thicker than honey and has the appearance of dark amber maple syrup. 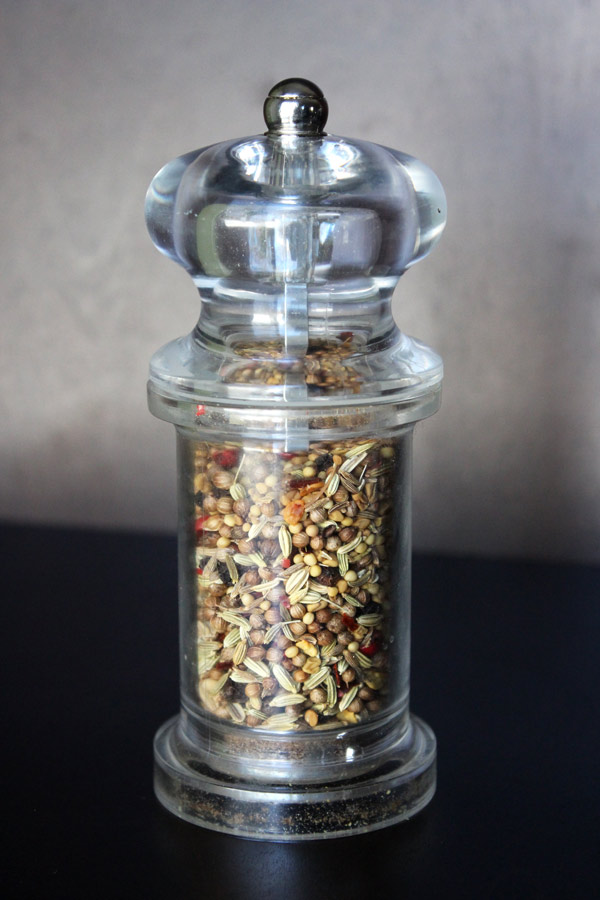 The spice combination is reminiscent of sausage flavoring and will trigger your meat memory; fennel, mustard, peppercorn, fenugreek, coriander, and cumin seeds. I put all these spices in an old pepper cracker and sprinkle it over the marinade for extra depth in flavor.

This spice combination can be used for many different savory vegan dishes and provides that sausage spice.

I also rubbed a few basil leaves around in the marinade to capture their essence, and ate them on a piece of cucumber afterwards…yum!

I smothered the zucchini in the sweet hickory marinade and stacked them on top of each other in a glass dish. I then let them sit in the marinade for about 10-20 minutes, or until the zucchini starts to soften and release its juices. I’m sure you could marinate them longer if you’d like.

After they’re done marinading, I laid them out individually on a dehydrator sheet and dehydrated them for about 1 hour at 115 degrees. 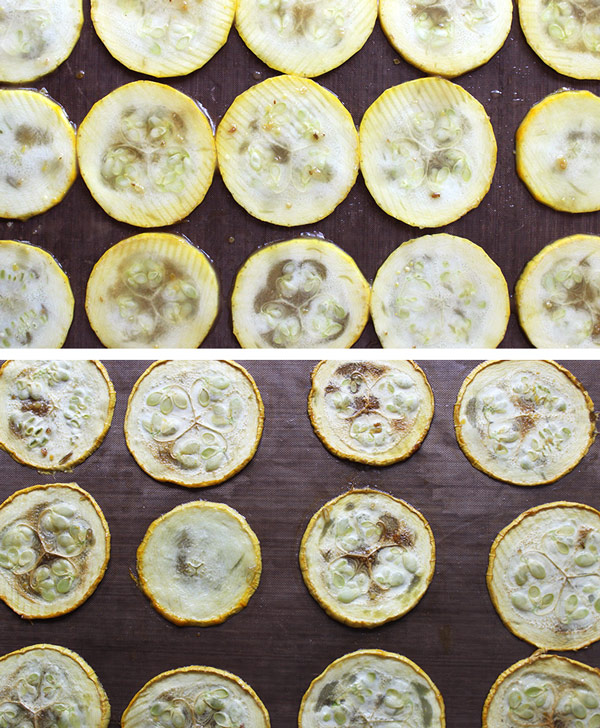 There are a ton of bun recipes out their, I suggest you choose your favorite! Since the zucchini is technically raw vegan, you could go all out and make these raw vegan buns for a completely raw vegan sandwich.

Dominick had made some vegan biscuit/buns made with coconut oil instead of butter, he stored a left over biscuit in the fridge and I cooked it up real quick in our convection toaster oven. It was light, airy and fluffy, it was perfect. He used this recipe if you’re interested. But since we didn’t have self rising flour he just added 1 tsp baking powder.

I kept it simple with an egg-less olive oil mayo, tomato, and swiss chard from my garden, it was pretty gratifying! 😉

I kept it simple but you can deck yours out with mustard, pickles, sprouts, oil & apple cider vinegar, or whatever you fancy on your sandwich. 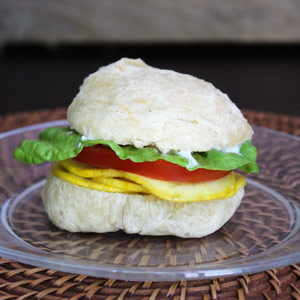 Store in an airtight container in the fridge for up to 3 days.
Alternatively you can use an oven at it's lowest temperature, preferably with a convection setting; times vary. Spice Mix*:
Even proportions of whole seeds; fennel, fenugreek, coriander, mustard, cumin and half as much peppercorn.