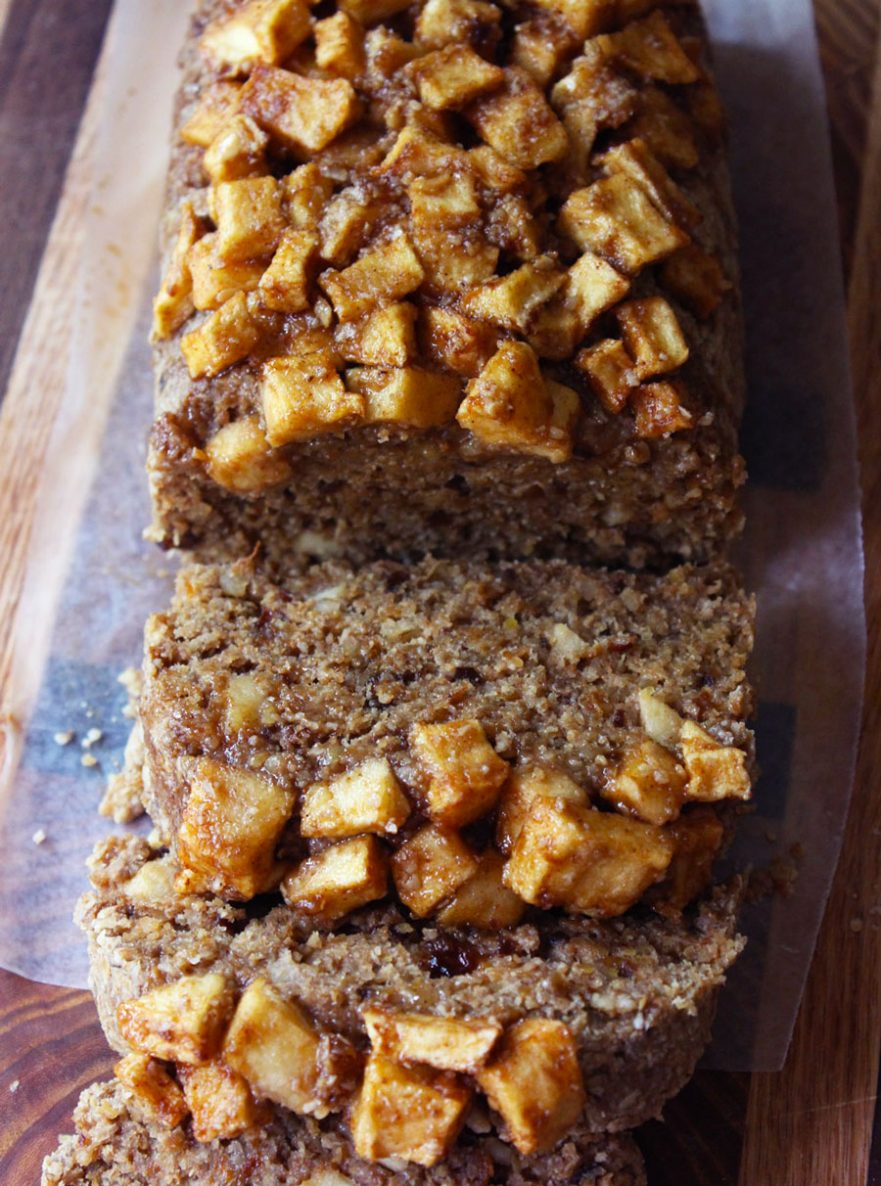 A hearty, moist and chewy raw vegan cinnamon apple bread; made from a base of oats, walnuts, flax seed, and prunes. Let me just say this, you need this bread in your life, it’s so good words don’t even begin to describe the decadence.

The warm flavors of cinnamon, oats and walnuts perfectly match the sweetness of the honey crisp apples and prunes. Pair that with vanilla ice cream and you have dessert fit for a king!

This bread is based off the raw vegan banana bread recipe I adore so much. Walnuts, prunes, apples and coconut nectar are used instead of brazil nuts, dates, bananas and agave. I’d say these ingredients are interchangeable, as long as you keep the measurement of dry to wet ingredients the same.

To start the process we’ll dice the apples, mix them with lemon and ceylon cinnamon, and dehydrate them until they start to soften.

Then we’ll grind the oats, walnuts and flax seed in a blender until we get flour. I don’t buy these ingredients already in flour form because of oxidization. You want your ingredients as fresh as possible, not only to avoid oxidization, but also to preserve their flavors. 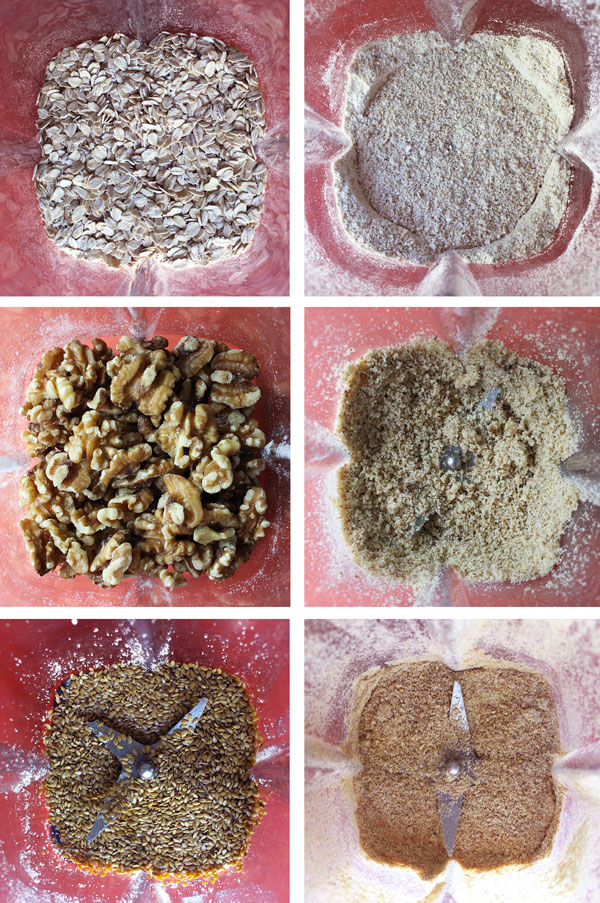 To mold everything together we’ll make a prune paste, date paste, or any other dried fruit paste, by blending it with a little water. I used half prunes and half dates because I had both on hand, but either-or works well.

Once the apples are soft, and the bread flour and fruit paste are prepped, we mix it all together, mold it into a loaf, stick it in the dehydrator, and begin preparing the topping. 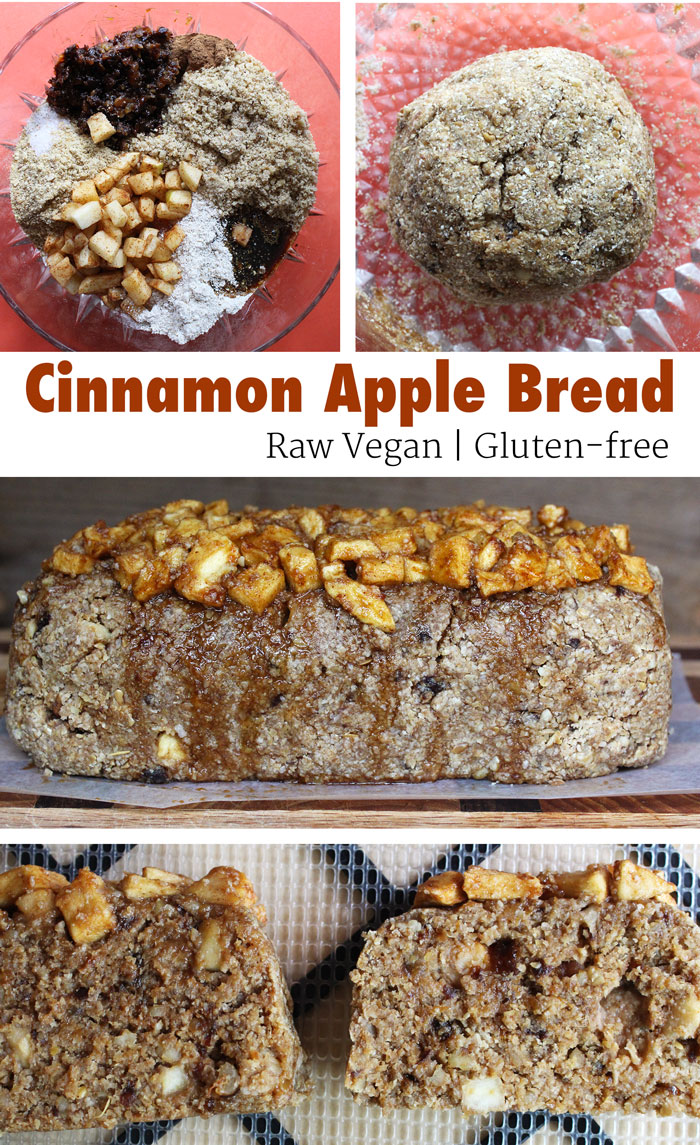 The cinnamon sugar apple topping is made by mixing together the other half of the diced apples we dehydrated, along with coconut oil, coconut sugar, cinnamon, and liquid sweetener. Then we press the apples into the loaf of bread and dehydrate for another 1-2 hours, or until the apple topping is dried and stuck to the bread.

We’ll slice the bread about an inch thick and dehydrate them for another 1-2 hours or until dry. Be sure not to over dehydrate, the bread should be firm, yet chewy and slightly moist. 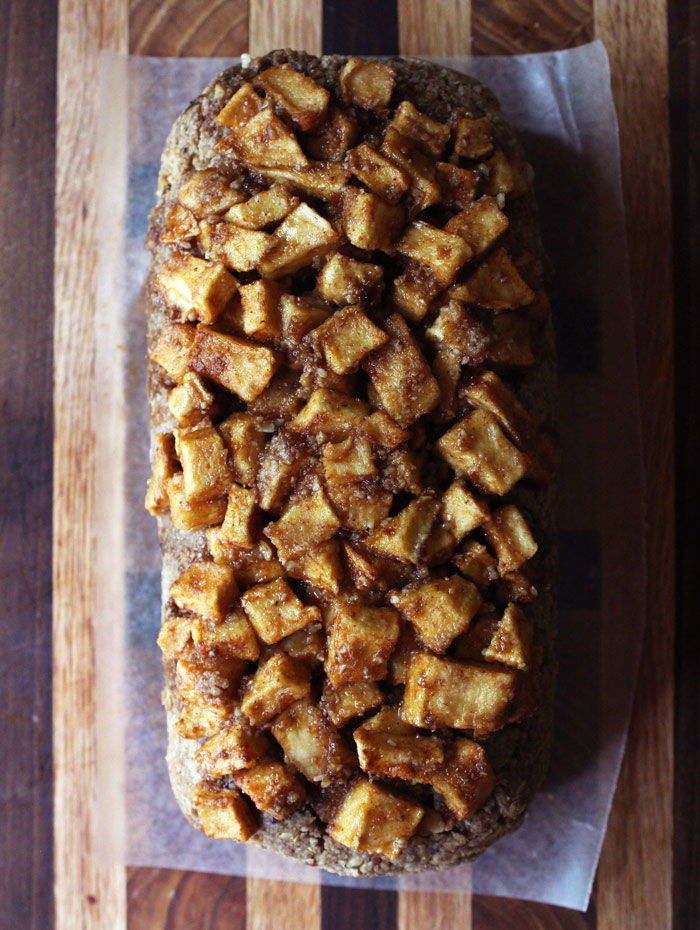 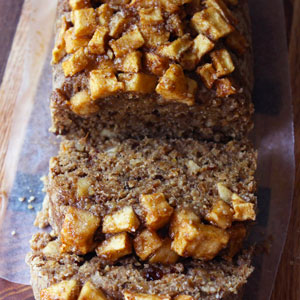 To warm, place in the dehydrator at 165F for 15-20 minutes or until warm.
*Prunes can be replaced with dates.
**Coconut Nectar can be substituted with any liquid sweetener you prefer.
Store up to 3 days in an airtight container on the counter or in the fridge.