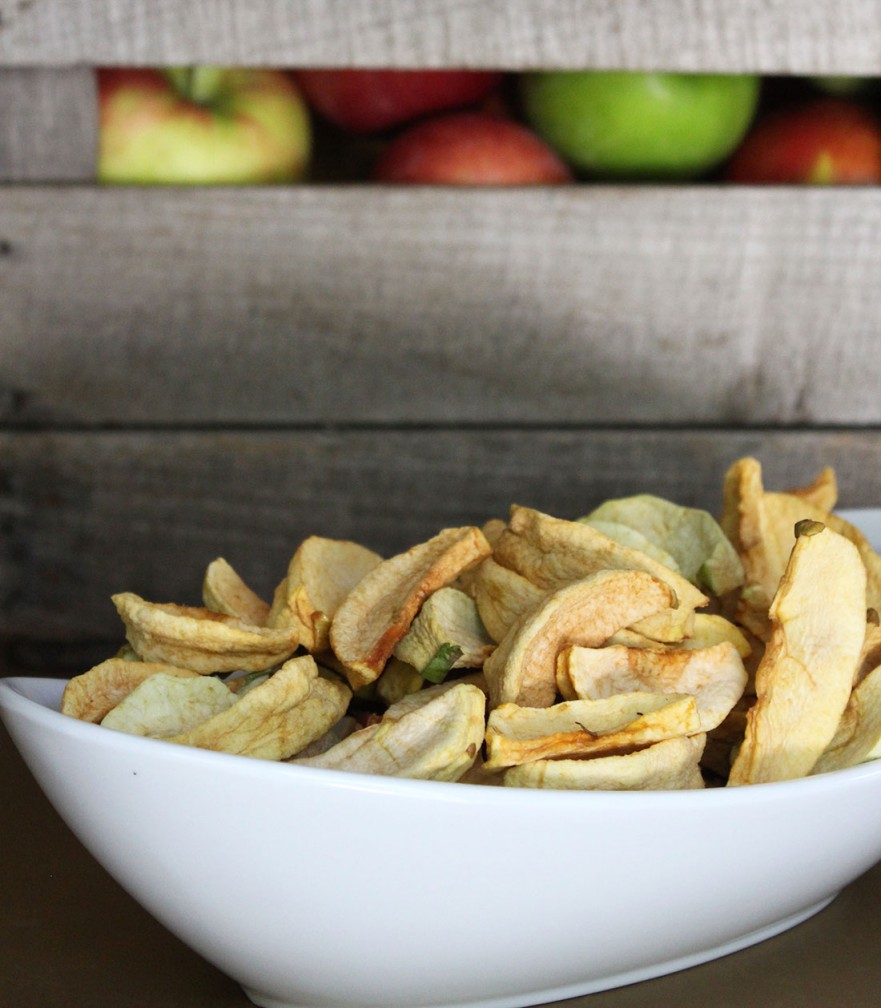 This year Dominick and I bought 2 huge crates of apples from the farmer’s in a span of 2 weeks! There must have been at least 100 apples and since we bought so many the farmer’s gave us a deal at $40, from their original price tag of $2.99/lb. I’ve got to imagine we saved at least $40 buying in bulk, all you have to do is ask. We didn’t dry all the apples, some were eaten raw and some were juiced, but in the end we have the equivalent of about 12 sour patch candy bags!

We used a bunch of different apples because each of their flavors are unique. We used granny smith, honey crisp, stayman, mutsu, jonagold, and a few others I can’t remember exactly .

Of course if you or a friend know of a good apple tree, that’s the way to go. We used to love having friends over and taking them to the apple trees around our neighborhood in KC. After an hour or so climbing trees and picking the best apples, we would all go back to the kitchen and be assigned specific tasks. You had the peelers, the cutters, and the juicers, it was like an apple factory! But it’s so much fun when you’re with friends, having laughs and sharing mother nature’s bounty. 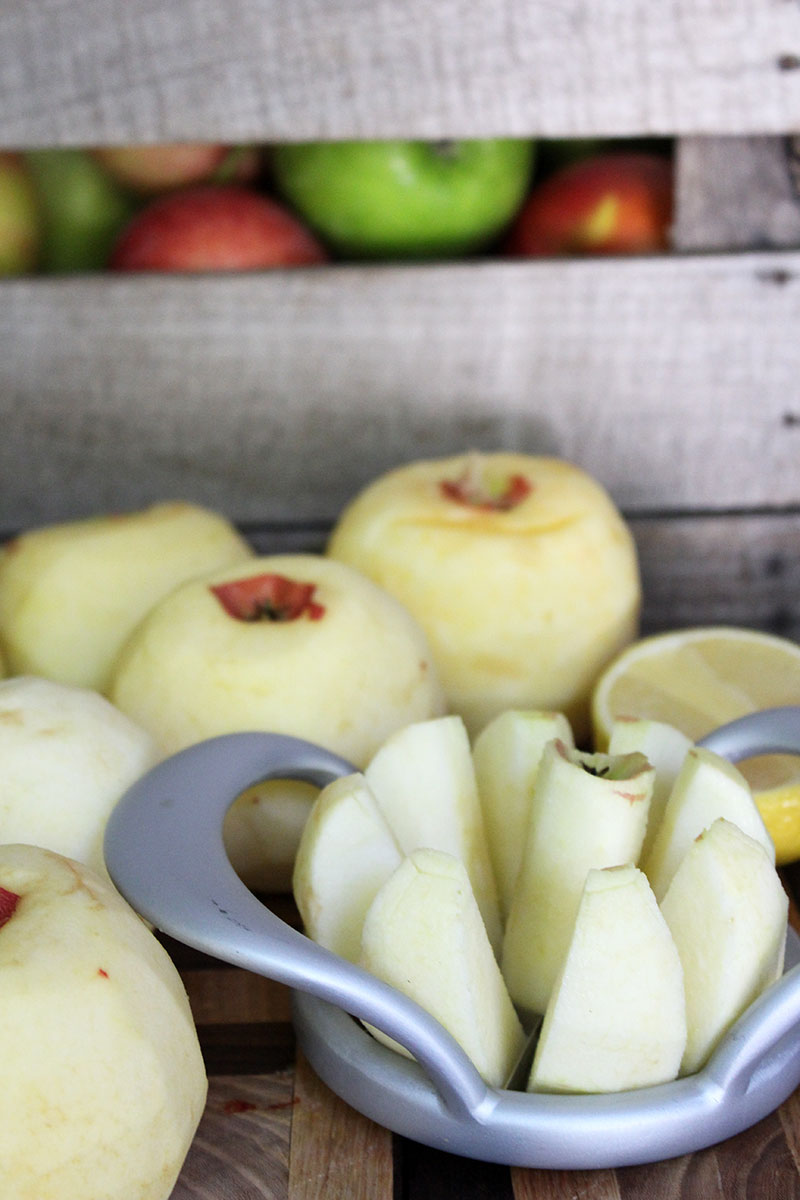 This year it was just Dominick and I, as I was making our halloween themed dinner, Dominick was peeling apples in front of the TV watching the game. He also had his own game, try to peel the apple in one piece. I tried but failed, he’s got skills, 100 apples later your bound to have acquired some skill..right? 😉 lol

The last couple of year’s we have been keeping the apple’s skin on, and using the mandolin to make apple chips.

This time I wanted to try something different, apple wedges. So we bought a stainless steel apple cutter, and boy was it a good idea. This thing is so heavy it just glides through the apple like butter. Plus when dried, the wedges stay soft in the middle; if you don’t dehydrate them for too long. I can equate the texture to a dried jujube, aka red date, if you know what that is. It’s basically fluffy yet dense and still chewy like candy.  After trying the wedges, I’ve realized I don’t particular like the thin apple chips because they lack the chewiness.

As I’m sitting here eating them, they almost remind me of Swedish Fish candy, except it doesn’t stick to your teeth as bad. 😉 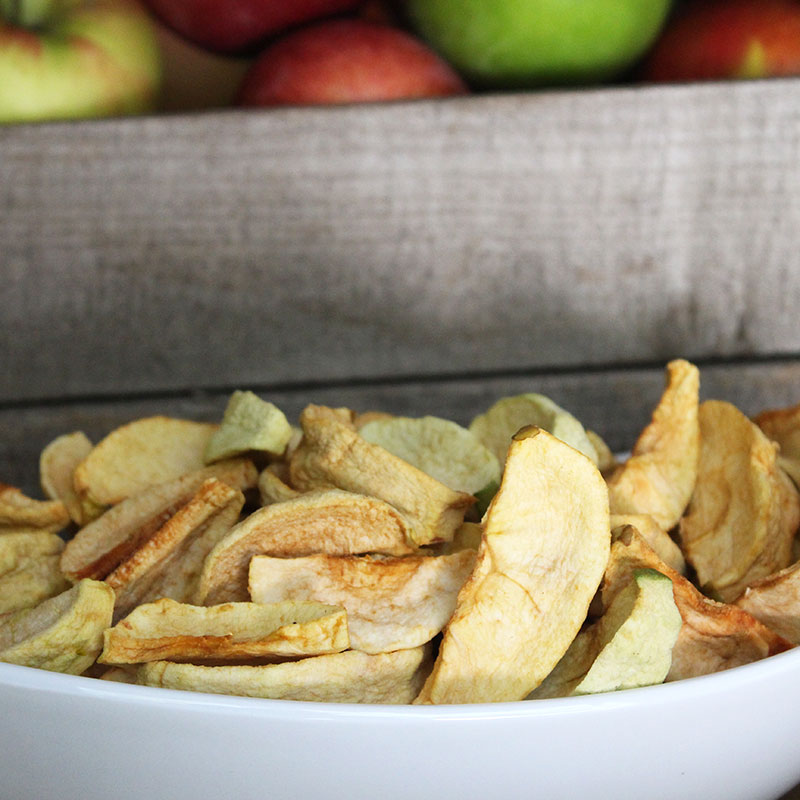 Before we dehydrated them, we sprinkled on some lemon juice to prevent oxidization, the browning. After about 12-24 hours the apples were perfectly soft and chewy. You could also use an oven at its lowest temperature, time will vary so keep your eye out, and try them frequently.

How To Make Dried Apple Candy 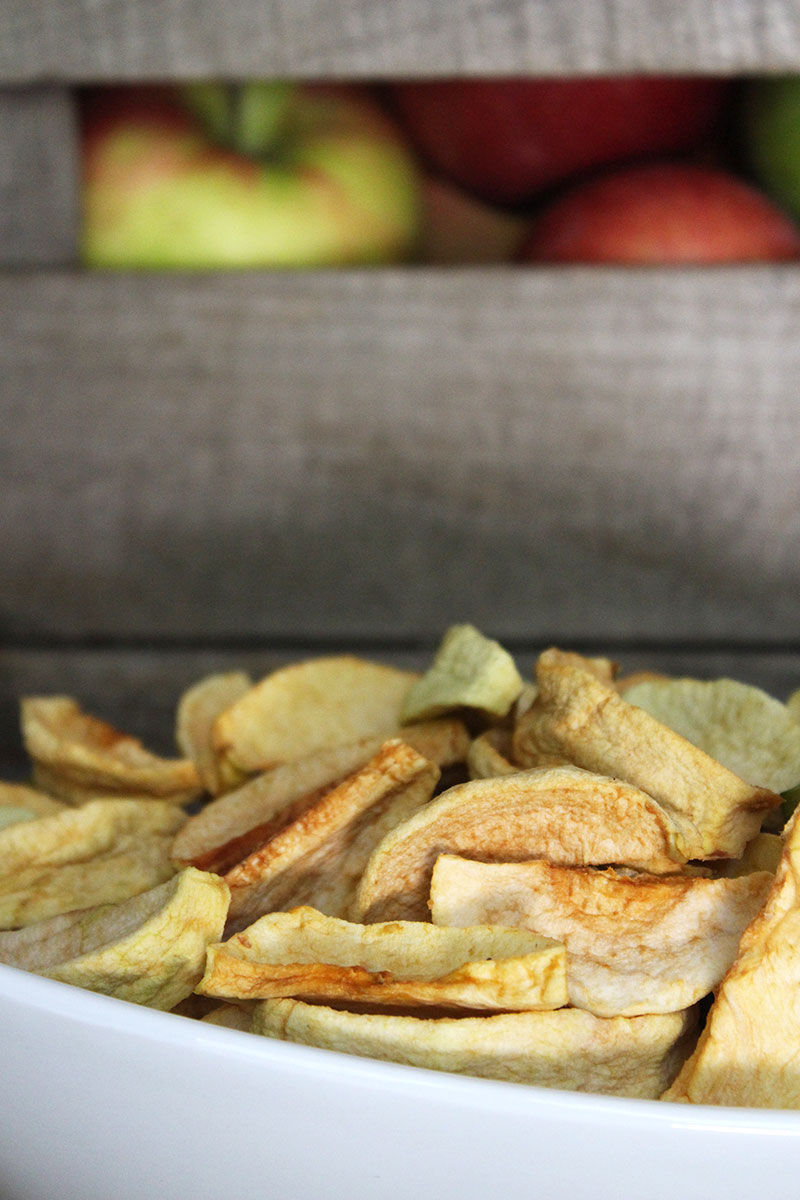 One of my favorite food combinations is dried apples paired with cayenne covered almonds. My friend Karl back in KC would soak his almonds and then cover them in dried powdered cayenne and then dehydrate them. When we got together to cook he would always put these out as a snack for me, best host ever! They were so good, it’s making me salivate just thinking about the sweet and spicy combination.

Another thing you could do it sprinkle these apples with some cinnamon and coconut sugar before dehydrating…yum!! There are endless possibilities, just add your powdered spice to the apples before dehydration and presto you’ve got yourself a flavored apple snack. You could also go along the lines of apple jerky or apple bacon flavors.

I hope I’ve inspired you to try this simple apple snack! Happy fall!