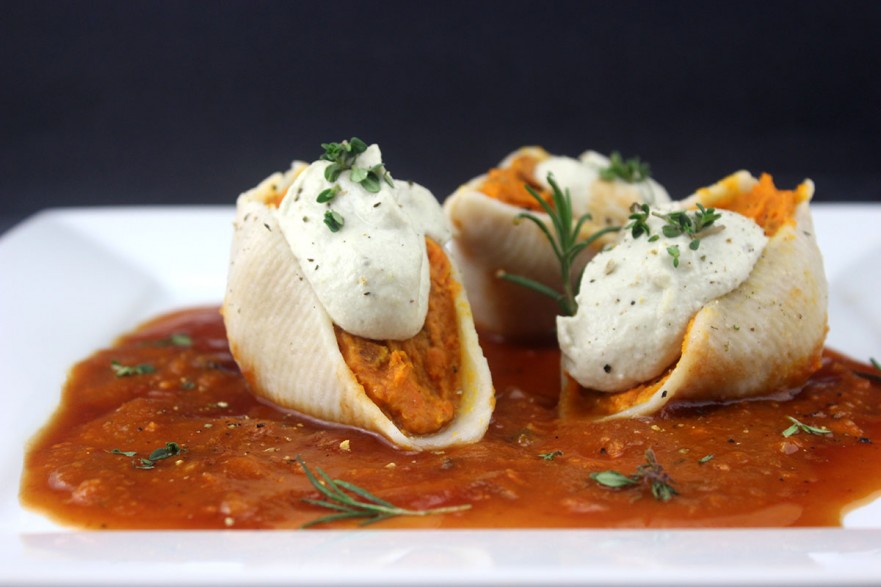 These vegan stuffed shells were made on a whim, after the dreaded question “what do you want for dinner?” I finally decided to take a look around and come up with something different. I saw the many sweet potatoes I had sitting on the counter, we knew we wanted stuffed shells of some sort and we had leftover cashew alfredo sauce from my favorite spaghetti squash alfredo recipe. 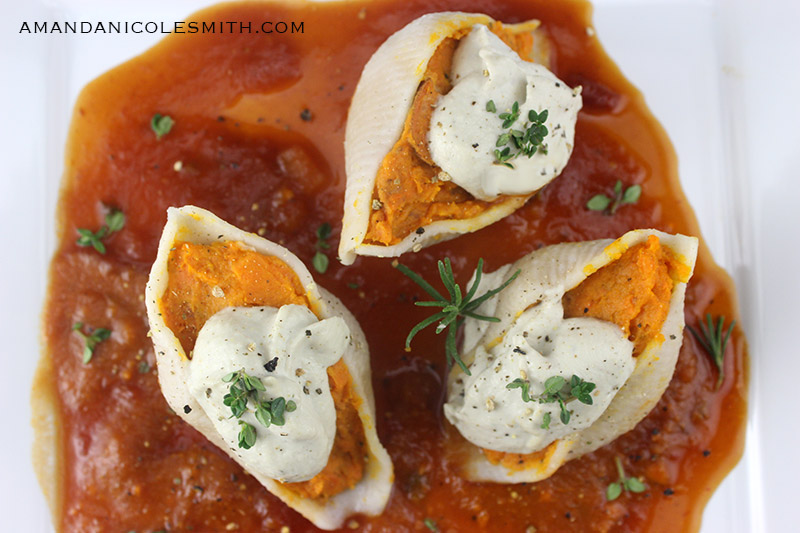 My recent favorite way to cook sweet potatoes, or any vegetable for that matter is in my little convection oven. I heat that baby up to 425 degrees, cube my sweet potatoes and throw a little bit of coconut oil on top. After 20-30 minutes or so you have the softest potato pillows in the world, and if you’re lucky they crisp on the outside. Although for that to happen they must be in a single layer, barely touching each other, evenly spread coconut oil and salt. 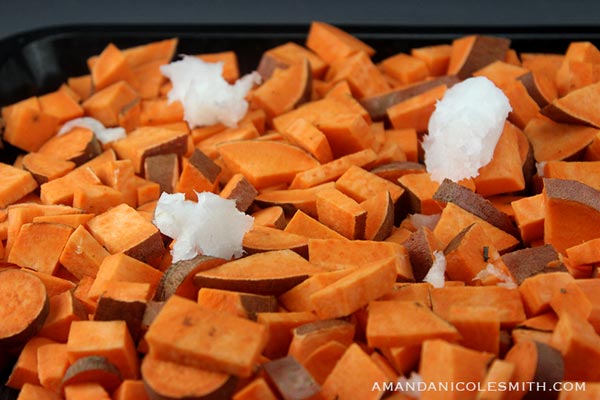 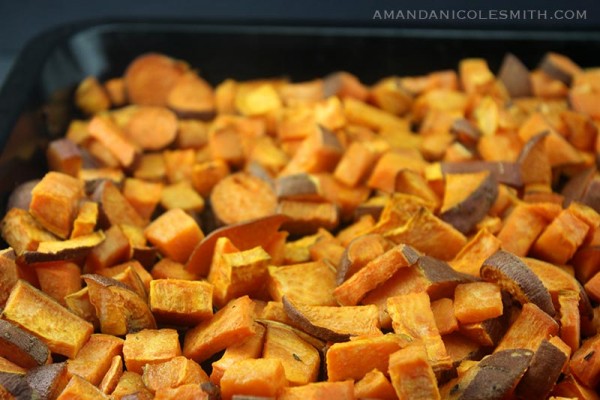 All you have to do is mash the potatoes, stuff the shells, throw on a dollop of raw vegan cashew alfredo sauce and smother in red sauce. It’s too good, if you ask me!

I normally use Tinkyada’s brown rice shells, they have a really good consistency compared to other non wheat noodles I have tried. The box looks really tiny, and it says it’s only 8oz, so I thought hmm this might not be enough but it was more than enough. I had 1 large sweet potatoes; about 1 pound worth, and 1 cup of raw vegan  cashew alfredo leftover. 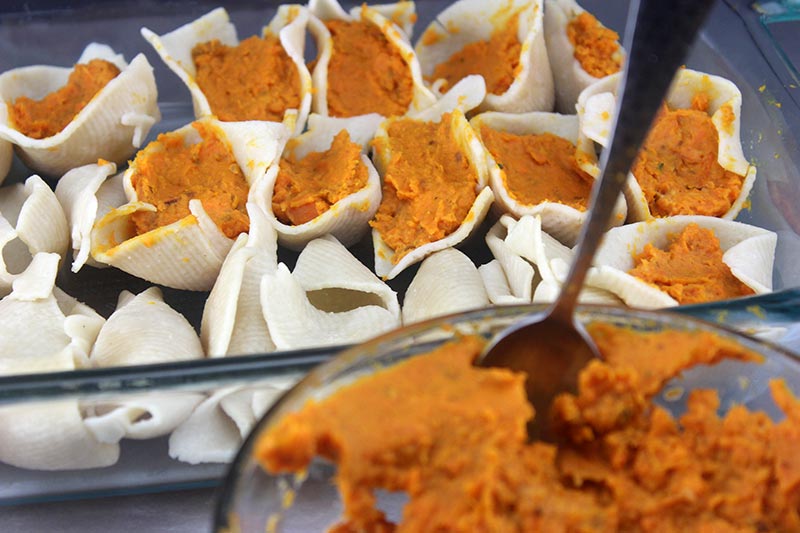 This was not enough sweet potato mash or cashew alfredo for 8oz of Tinkyada shells; in fact it was only enough for half the box. There must be about 20 shells, they are really small at first but they become gigantic. So we normally get about 4-5 plates out of one, box which is good for lunch or dinner the next day. They heat up really well in my convection oven or they can be steamed.

In the winter time we use tomato purré from glass jars and add in fresh garlic, onion, peppercorn, rosemary, sage, thyme, coconut sugar and lots of basil. We cook down the tomatoes with some of the herbs and spices and then we add fresh herbs 1/2 way through and fresh herbs when done. I am in love with herbs!

I normally heat up leftovers in a pyrex bowl for storage with the tomato sauce on top to keep the noodles soft. I heat them up for 15-20 minutes on 350 degrees and they turn out just as amazing as the first night.

However another method works just as well.  Leave the cashew alfredo, tomato sauce, and shells separate. I then steam the shells to get them soft again. I then heat up my sauce and put it all together.

I do not recommend heating up the cashew alfredo.

I tend to have a heavy herb hand, adjust as needed. 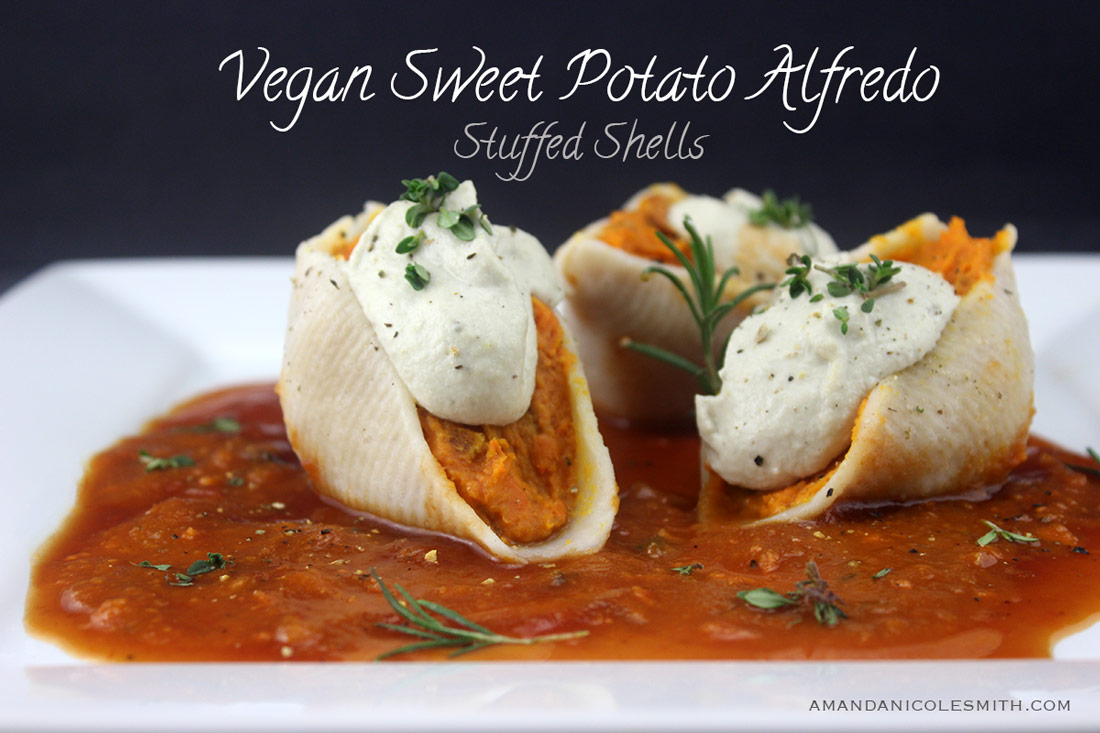