Pak dong is a Thai sweet and spicy cabbage, carrot and spice ferment. Purple pak dong is a twist on the original pak dong inspired by Puckers Gourmet.

The best way to eat pak dong, for me personally, is over rice. I also like to get fancy and make what I call a mixin’ meal bowl; a bowl of rice, greens, tomatoes and pak dong, drizzled with a bit a tamari or soy sauce.

It can also be served over a bed of greens, on a veggie burger, tacos; pretty much anything where sweet and spicy would work.

I came across Puckers Gourmet, an exceptional pickle company, while visiting my home town in upstate NY. They sell the ultimate pak dong, along with other great ferments, at the Saratoga and Glens Falls farmers market. But those aren’t the only places, they are all over that area in many different markets upstate. If you’re ever there, I highly recommend checking them out. They always have free samples too!

After making the original many many times, I decided to make a few changes, and document the taste differences. 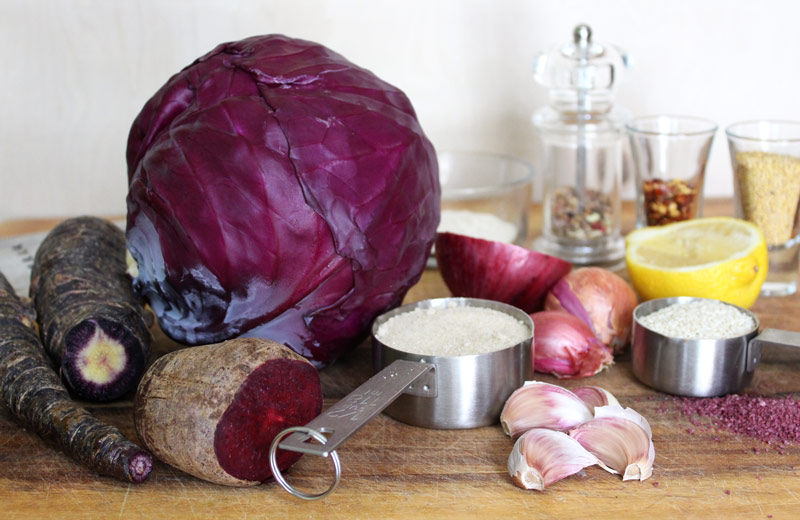 Upon posting this recipe to one of my favorite fermenting groups on Facebook, some people were concerned with the vinegar in the recipe.

If you don’t already know, vinegar makes it very hard, if not impossible, for lactobacilli to multiply; thus lacto-fermentation does not occur. However I realized this was a crucial ingredient for that similar Pucker’s taste.

Because it is such a small amount of vinegar, fermentation does occur, but many people still wanted a vinegar free recipe. So with this recipe I decided to substitute vinegar with lemon, to try to achieve that tangy taste.

It was also suggested that you put the vinegar on after fermentation, I tried just spooning a bit of apple cider vinegar over the top of the rice and it really wasn’t the same.

Today I will be adding the vinegar directly to the jar after fermentation, and then into the fridge to let it marinate together. I have a feeling this will work well and I will update soon.

There’s something about that vinegar that just makes the sweet and spicy pop. I’m no flavor expert, but I’m learning as I go.

I will say this pak dong is definitely different from the original, especially with the newly added spices. What stands out to me is the coriander and fennel, it gives a bright fresh flavor.

I really like the original’s contrast of sweet and spicy and the freshness might have thrown off that balance for me a little. It’s certainly not off-putting, it’s just something you’ll have to decide if you like or not.

If you love onion flavor, than you’ll love this addition. But when describing the differences, I’d say it gives it a slight “bitter spice”.  If you’re trying to give this to kids, I probably wouldn’t use onion, because it is pungent.

The red cabbage was a bit crunchier and thicker, it also had a deeper peppery taste. The changes are subtle but noticeable. I would say the green cabbage was definitely a little softer and sweeter. 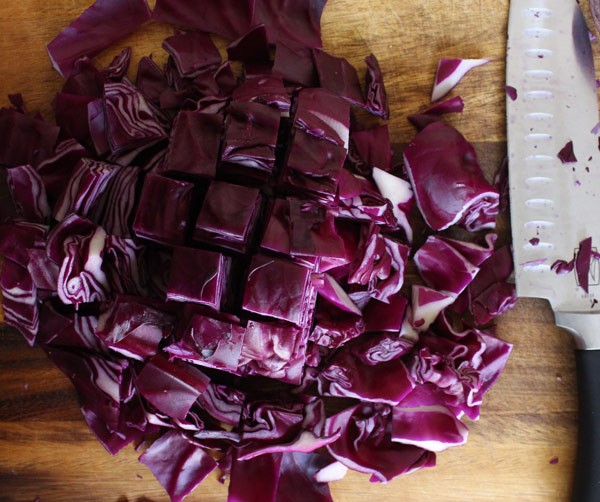 There was no difference as far as I could tell.

Essentially you mix all the ingredients together, pack it tightly into a jar, cover it with water, put a lid on it, and let it ferment for 2-5 days. Since carbon dioxide is a by-product of lacto-fermentation, named after the fermentation leading healthy bacteria lactobacillus, the jar must be “burped”; meaning you open the lid to slightly allow the CO2 to escape.

You can taste the ferment at any stage, although if you eat it before fermenting for a day or two it will taste very salty. 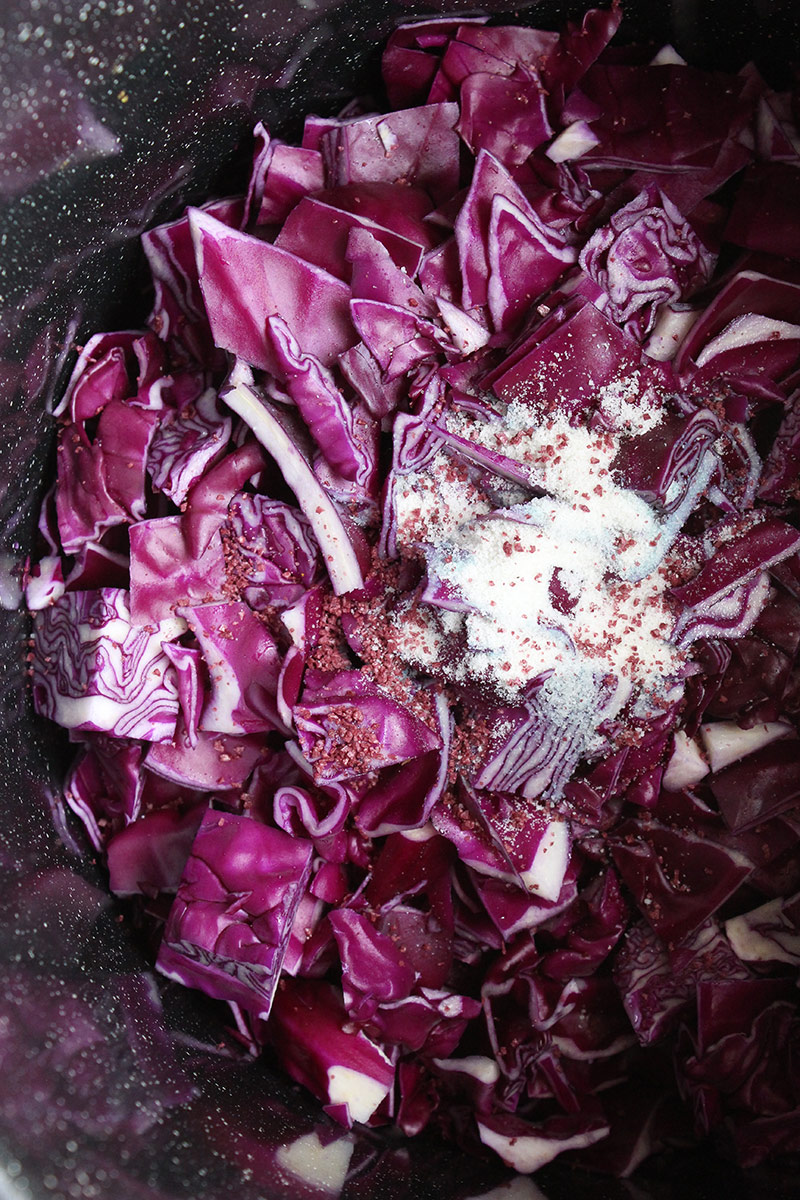 More specifically, you salt the cabbage while you cut the rest of the veggies, until they start to release their juices. You would then crunch the cabbage and salt with your hands to soften them a bit.

Then you add in the all the ingredients and stir it all together. I am using a huge pot, because I didn’t have a big enough bowl. 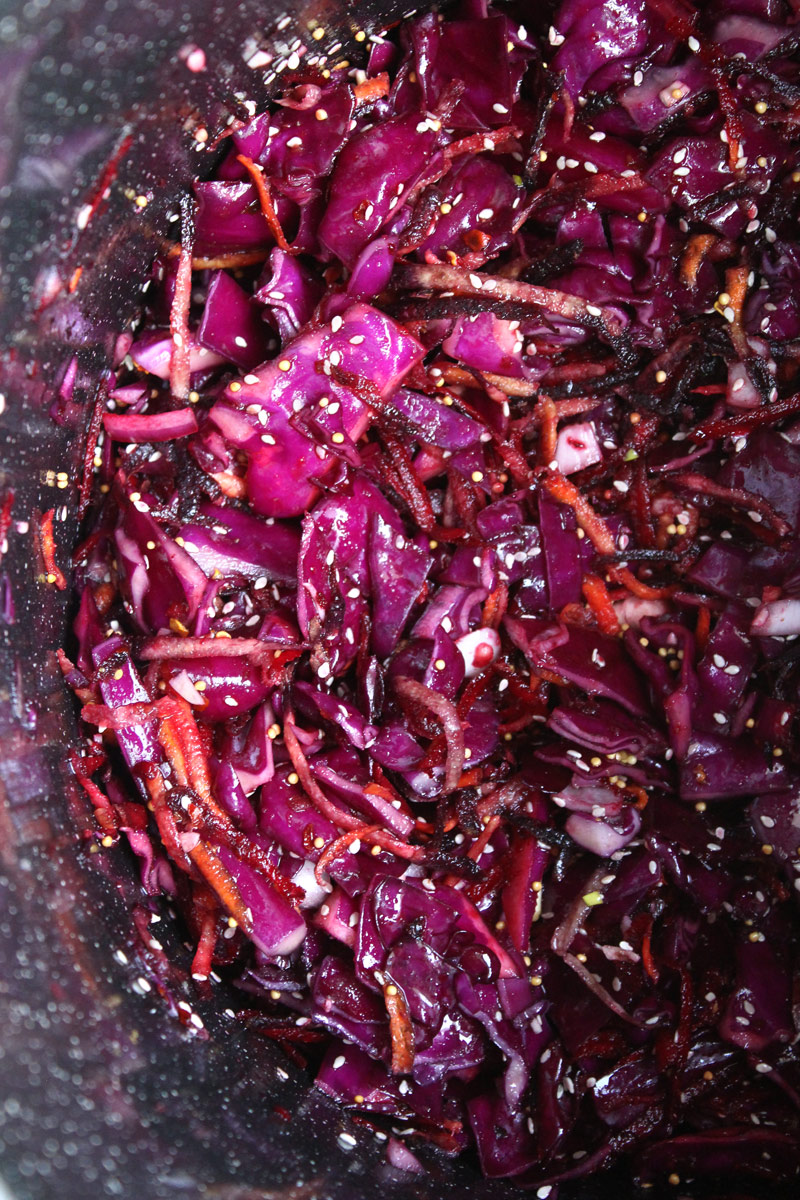 Lastly you pack it all into a sterilized jar and pour filtered water on top until the veggies are submerged. You can also use a leftover cabbage leaf to keep the cabbage under the water, to prevent any spoilage; the isn’t too big of a deal since it’s a quick ferment.

I probably shouldn’t have filled these jars so high because they will ooz once pressure is built up from the CO2. This is where an airlock is very useful, so coz can constantly escape, with no buildup, and no oxygen can come in.

Pickle-it probably has the best airlock lid/jar combos I’ve seen. I really need to get one, I just have too many mason jars I can use! 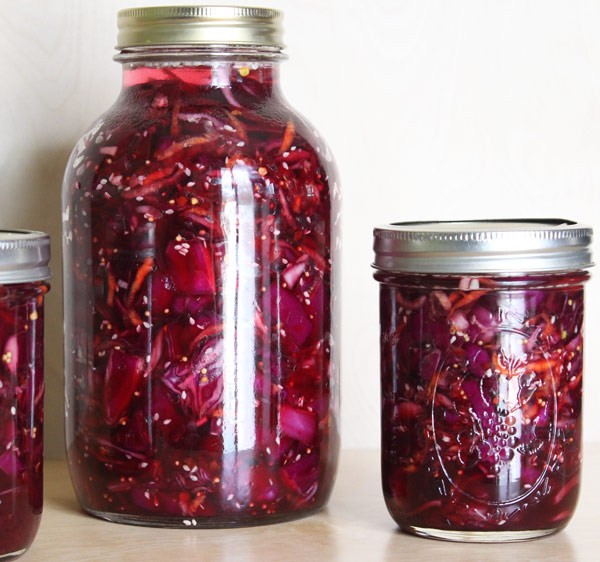 The ferment is usually done at after 2-5 days. The colder the environment it’s in, longer it will take, and vice versa.

After it’s done fermenting and you have realeased any CO2 pressure, put it in the fridge where the flavors will continue to marinate together, and any yeast flavor will dissipate. Fermentation will slow in the fridge, which means it won’t stop immediately, you may need to release additional pressure.

Let me know if you have any other questions and enjoy!! 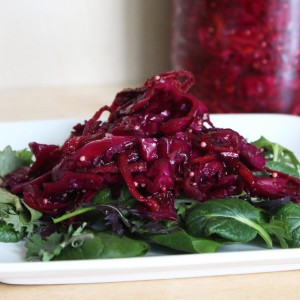 *Spices; fennel, coriander, fenugreek, cumin, cardamom, peppercorn, and onion powder.
I put these spices in an old pepper grinder, and grate about a 1/4 tsp and mix it in with almost a tbsp onion powder.
I recommend playing around with different spices, to see what you like!